Aircraft from Russia transferred the base to Tajikistan 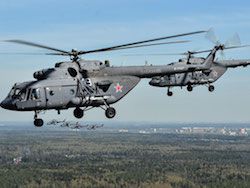 The central military district transferred a link of transport and combat Mi-8 helicopters, percussions of Mi-24 and bespilotnik "Outpost" on the territory of Tajikistan where there passes check of forces of ODKB. On it informs RIA Novosti news agency.

"During educational operations on fight against illegal paramilitary groups (NVF) in a mountain and hilly terrain the aircraft will provide conducting investigation and search, disembarkation of tactical air landings, cover of columns on march, expansions of armies in fighting orders and promotions on boundaries", – the assistant to the top military commander of TsVO colonel Yaroslav Roschupkin told.