At the airport of Gelendzhik the helicopter Mi-8 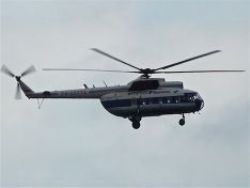 The Mi-8 helicopter was wrecked at the airport of Gelendzhik in Krasnodar Krai. According to RIA Novosti news agency, incident occurred on Thursday around 15:00.

On a place of accident there was a strong smoke, field services are pulled together.

Meanwhile, according to preliminary information of a source of agency, as a result of incident two persons were lost, one more suffered. The error of crew could become the reason of crash of the Mi-8 helicopter at the airport of Gelendzhik, reported a source in power structures of the region.

"At landing approach the helicopter, according to preliminary data, was hooked by a tail part for a runway then collapsed", – the interlocutor of agency told.

It is noted also that the broken helicopter belongs to JSC PANH – the Russian aircraft company which is based in Ulan-Ude.