Behind civil planes will look for satellites 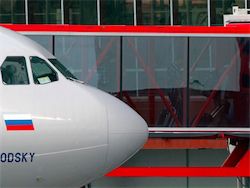 The international telecommunication union made the decision on allocation of a frequency range for tracking by satellites of civil planes. About it reports Reuters.

For supervision over planes of civil aviation the range of 1087,7-1092,3 megahertz will be allocated. On this frequency the signal of ADS-B which allows to trace location of the liner in real time is transmitted. Monitoring of civil flights in blind spots of a land radar is especially actual: over oceans, Earth poles.

Systems of monitoring should be established till November, 2016. The aircraft should wire the coordinates of times 15 minutes or is more often in extreme situations.

Making decision on terms of implementation of the program of monitoring was influenced by criticism of airlines and regulators to whom they underwent after complete disappearance of the "Boeing-777" belonging to Malaysia Airlines.

To coordinate the general rules and to establish tracking systems on civil planes of the United Nations and IKAO (International Civil Aviation Organization) solved after Air France plane crash to the Atlantic Ocean in 2009.

The "Boeing-777" of the Malaysia Airlines company which was carrying out flight from Kuala Lumpur to Beijing, disappeared from screens of a radar on the night of March 8, 2014. Till detection of fragments on Reunion of any certificates on the gone liner it was not possible to find.