Cерийное production of the Mi-38 helicopter will begin in 2015 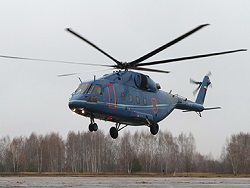 «Employees of KVZ sent on Mil Moscow Helicopter Plant the fourth prototype of Mi-38 for passing of flight tests before certification», – reported in the press service.

KVZ plans to receive the certificate on the base Mi-38 model at the beginning of 2015 then the mass production of the new car will be developed.

The multi-purpose Mi-38 helicopter started to design in 1981 on replacement to the widespread Mi-8 helicopter (Mi-17). The first flight of Mi-38 made in December, 2003. At present four prototypes of the car are made. It was originally supposed that the car at will of the customer can be equipped with the American PW127TS engines, however after the conflict to Georgia the congress of the USA forbade delivery of these engines to Russia.

Mi-38 it can be used for transportation of goods and passengers, to be used as the search and rescue helicopter and flying hospital, for flights over a surface of the water. It is equipped bearing and tail with screws from composit materials. The power plant consists of two turbovalny TB7-117B engines. The onboard equipment Mi-38 allows pilots to drive the car in difficult conditions, to make automatic flight on a route, landing approach, automatic lag and helicopter stabilization in all modes of flight.