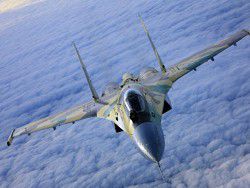 Crews of the fighters Su-30CM and Su-35С of a destructive aviation regiment of association Air Force and air defense of East military district (VVO) in Khabarovsk Krai carried out educational and fighting flights with practical bombing, reports the military district.

Maneuvers took place on one of aviation ranges in Khabarovsk Krai. Nine fighters Su-35C and three fighters Su-30CM made pair take-off with an interval one minute and as a part of a squadron executed educational bombing in the set square. In total on the land purposes simulating the developed surface-to-air missile system, a column of tanks on march and airfield with planes of the conditional opponent, 24 aviation bombs were dumped.

– All purposes were successfully struck, – is told in the message.

The doctrine had planned character and is directed on improvement of flight skill by crews and pilots of destructive aircraft of the district at performance of educational and fighting tasks.