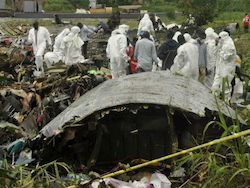 The Ministry of Foreign Affairs of Armenia reported that five of six crew members of the An-12 plane which has broken in the Southern Sudan were citizens of this country. The sixth crew member – the citizen of Russia.

Earlier it was reported that all crew An-12 was Russian.

In total as a result of crash more than 20 people were lost.

"According to the data received by embassy of Armenia in Egypt, as a result of a plane crash in the Southern Sudan five citizens of Armenia were lost. All of them were crew members", – quotes the official representative Armenian the Ministry of Foreign Affairs Interfax agency.

According to arriving messages, onboard the transport plane there were 18 people: six crew members (one Russian and five Armenians) and 12 passengers.

Accident occurred near the airport Juba after a while after take-off. Eyewitnesses tell that the plane began to come back to the airport for a crash landing.

It fell to the small island on the river White Neil where the fishing community lives. Fragments, including a plane tail, are scattered at the coast, and the fuselage is in forest area.

According to preliminary data, as a result of crash of An-12 some tens people were lost. France reports a press about 25 victims, Reuters (referring to eyewitnesses and representatives of local authorities) – about 41.

The Sudanese company Allied Services Limited was operator An-12. The Tajik company Asia Airways owned plane. According to TASS, it was in operation since 1971.