Guinea: the police by the helicopter dispersed fans of football 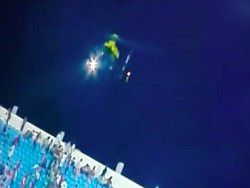 The semifinal match of the Cup of Africa on football between Equatorial Guinea and Ghana was interrupted because of excesses of fans. About it reports Eurosport.

On the 82nd minute of game when Ghana conducted with the score 3:0, Guinean fans began to throw guest sector bottles and other subjects. Ghanaian fans made an attempt to take cover from aggression near gate where photographers and operators usually settle down. The local police had to lift the helicopter in the sky to calm the Guineans enraged by defeat of the team which in addition is the hostess of tournament.

After policemen involved the helicopter, Guinean fans left from stadium and began to wait Ghanaians on the street. Organizers of a match decided to lead Ghanaian fans in a construction through a course intended for football players. Apparently, Ghanaians should spend the night at least at stadium waiting for when security officers of Equatorial Guinea will provide an order outside.

After a while the match was renewed and ended with a victory of Ghana with the score 3:0. In the tournament ending «black stars» will play with Cote d’Ivoire. The meeting will take place on Sunday, February 8.

The cup of Africa-2015 initially should be carried out to Morocco, but the country refused carrying out competitions because of threat of distribution of a virus of Ebol. As a result tournament it was decided to transfer to Equatorial Guinea where the national teams had some problems. For example, football players of Congo complained of bad conditions of accommodation.