How electronic intelligence of Russia will develop? 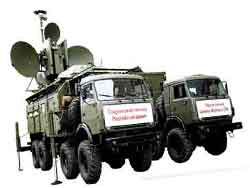 Campaign in Syria shows a big role of electronic means of conducting investigation. The western mass media note that start of cruise missiles from the Caspian Sea, a struck number of objects of Islamists on theater of operations, would not have such impressing effect, if not the Russian electronic complexes of prompting and a targeting, the analysis of fighting information.

But what ways in the near future the branch of military industrial complex creating for army and fleet of Russia the advanced complexes of radio-electronic fight will develop?

For delivery in VS Russian Federation of the similar equipment the known concern «Radio-electronic technologies» (KRET) which accumulates efforts of tens enterprises of defense industry in many respects answers. They let out the onboard equipment not only for military planes, but also for the civil. Electronics, capable to block or create a radio noise is at the same time made, to collect data in air space or on the earth, in the seas.
The Russian defense industry faced recently a number of serious problems. The difficult international situation pushed KRET plants to search of the technical solutions directed on creation of analogs of equipment which was delivered earlier from Europe and the USA. More attention is given now to cooperation with the companies in India and China.

In concern understand that there came a century of the high-precision weapon. And without electronics delivering data for start of rockets, the hi-tech weapon will appear simply a heap of metal. Therefore the success in future wars solves existence of electronic means of collecting military information and a targeting. Radio-electronic systems help to disorganize all structure of military management of armies of the opponent. Powerful electronic attack blinds and deafens the enemy, forces to control loss over parts. As a result of competently planned operation at all intervention of ground forces in this situation can not be necessary.

The Russian military industrial complex considered experience of the 90th years of the last century, war in Yugoslavia in Iraq, in the Persian Gulf. From materials of the Russian press (the Izvestiya newspaper published interview to KRET management) it is known that the concern conducts works on creation of the powerful microwave ammunition which application will affect electronics of the probable opponent.

Experts of KRET believe that is available there is a real possibility soon to receive a super-power complex of radio-electronic defeat with elements of selective power influence – in the directions and frequency ranges. Such weapon will put out of action electronic blocks of systems of prompting of cruise missiles and systems of navigation of planes, armored machinery of the opponent.
Already now the KRET enterprises adjusted the release of the REB "Krasukha-4" modern complex which has received the nickname "cap of darkness". The complex let’s to systems of a radar-location of a warring party deduce aircraft, cruise missiles, sea vessels, bespilotnik on the purpose. Locators cannot find the purpose on distances to 250 kilometers.

In the next year – two in the Russian armies also will arrive a complex of a passive radar-location. The system works only for reception, it is almost unreal to reveal, but the complex itself finds the enemy and issues data for suppression of the purposes of aircraft and to the military ships, rocket installations.
The practice which has developed in the Russian military industrial complex does not allow to transfer in army and on fleet arms which are not supplied with individual radio-electronic protection that increases survivability of military equipment in tens times.
For conducting electronic investigation the means which are based in air space and on a circumterraneous orbit are used also. The passive radar-location works in the widest range, without signals of a demaskirovka gives chance to receive fresh information on the locations of armies of the opponent. development of similar space complexes – the dissymetric answer of Russia to actions of military industrial complex of the USA delivering to the Pentagon the latest systems of aerospace attack.

Effective development of complexes of radio-electronic fight interests Rossi’s partner countries in the CIS, in Asia and in Latin America. KRET actively develops delivery of stations for statement of active hindrances. Such systems are applied in aircraft, established by "Sukhoi" firm planes. The station of active hindrances of individual protection SAP-518 gives good effect at fight against rockets against active radar-tracking heads of homing. The device intends for protection of planes of the Su-30MK type against modern rockets of the class "earth air" and "air-air". Acquire such equipment in India and China. It is supposed that by 2017 the Russian military industrial complex will increase delivery of radio-electronic military-oriented complexes to 35-40 percent.

For placement of the latest electronic equipment founders of transport aircraft for the Air Force of the Russian Federation assume to upgrade some planes. In particular, under the plane director of hindrances it is planned to convert Tu-214 liners and transport workers Il-76. Experts of KRET studied possibilities of installation of equipment onboard a number of transport workers from Tu to Il.

Planes directors of hindrances are very necessary to army and fleet of Russia. They can conduct radio engineering investigation, estimate a situation in radius of hundreds kilometers, define equipment and arms of the opponent, to find important military facilities – radar stations, surface-to-air missile missile systems. the park of similar winged cars in the Russian aircraft will be shortly expanded to level which is available in NATO armies and the USA. and it is tens planes of electronic investigation.