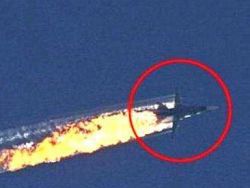 Turkish mass media reported about fight on a place of a landing of the Russian pilots of brought-down Su-24. Earlier it became known that both pilots managed to catapult.

On a place of an expected landing activity of governmental forces of the Syrian army and fighters of terrorist groups is observed. Also it is reported about emergence of attack aircraft of VKS Russian Federation around a plane crash.

According to not confirmed information, to a plane crash site of Su-24 the Air Force Mi-8 helicopter of Syria which was soon fired from the earth went and was compelled will be developed and to leave on base. Earlier it was reported that one of catapulting pilots was seized by Turkish special troops, but official confirmation of this information is not present.

Let’s remind that earlier near border with Turkey the Russian Su-24 plane fell, both pilots successfully catapulted and on parachutes landed on the earth.