In Italy created a cover protecting from bombs for luggage 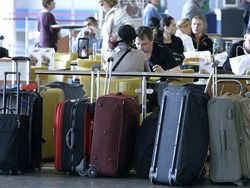 The Italian company D’Appolonia developed an "anti-explosive" cover for luggage. As reports Viaggi News, it takes place in a luggage compartment of the plane and is capable to neutralize explosion of the bomb hidden among things.

The cover, in a form a reminding awning, is made in Genoa from a textile fabric and composite materials which do it to the steady to thermal and shock waves generated as a result of explosion.

Development is issued in three options: for a luggage compartment of planes with a narrow fuselage (Airbus A320 type), for liners with a wide fuselage (Boeing 747) and for passenger salon. The system already took out the patent and the certificate of the European agency of aviation safety (EASA).

Founders noted that developed a prototype of such cover in the 1990th years, but then it was too heavy and rigid in order that it was possible to establish it in the plane.

Before November 16 leaders of the countries of G20 at the summit in Turkey agreed together to work over strengthening of aviation safety worldwide.

Questions of aviation safety left into the forefront after falling of Airbus A321 of the Russian airline "Kogalymavia" on the Sinai Peninsula on October 31. Officially causes of death of the liner are not called yet, but experts even more often points to the version of terrorist attack.

On November 6 flights from Russia to Egypt (later the relevant decree was signed by president Vladimir Putin) were suspended. Also on November 6 the decision on export from the republic of the Russian tourists was made. It was reported that to Russians will allow to take in the plane only hand luggage. Luggage will transport special flights.