In Russia decided to revive production of the Il-96 plane 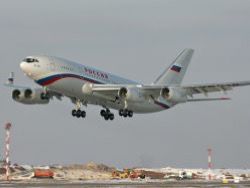 In Russia it is planned to renew a mass production of the Il-96 plane, the general designer of aviacomplex of a name of Ilyushin Nikolay Talikov reported, reports "Interfax".

«There are conversations on production Il-96 restoration in various options. It is expected that it will be deep modernization of the liner», – Talikov told.

According to him, now Il-96 is maintained by two airlines – presidential aviagroup and the Cuban airline.

Besides, Talikov reminded of plans of aviacomplex to renew production of the passenger Il-114 plane. And in six-seven years development of the new heavy transport Il-106 plane will be complete, he added.

«We already received good from the Ministry of Defence of the Russian Federation on this project which had the name "Ermak" earlier. The outline sketch is at present developed. I think, in 2022-2023 it will be possible to speak seriously about this aircraft», – Talikov told.

Silt-96 – the passenger long-haul shirokofyuzelyazhny plane, was made serially in 1993-2013.