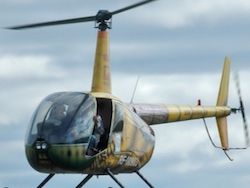 Three people were lost during helicopter crash in the settlement Makarak of the Tisulsky region of the Kemerovo region.

In Head department of the Ministry of Emergency Situations on the region at first reported about «rigid landing» helicopter. Information arrived in a call center at 11.15 on Moscow time. On a scene operative groups of Tisulsky garrison of fire protection and Control center in crisis situations of department of the Ministry of Emergency Measures of Russia across the Kemerovo region at once left. 12 people took part in operation and four units of equipment.

Rescuers managed to find bodies of three people – the pilot and two passengers. They caused police to a crash place. According to the representative of head department of the Ministry of Internal Affairs across the Kemerovo region, the broken helicopter was the American production – Robinson, broadcasts RIA Novosti news agency.

Among helicopter structure of Russia he received the informal name «the murderer of oligarchs» – for frequent and resonant plane crashes, however, who exactly possessed the broken helicopter while it is not known.