Mass media: Tu-160 – the most powerful plane for all history of military aircraft 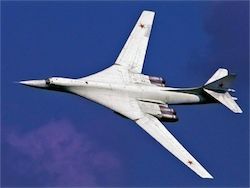 Introduction in action of a new type of cruise missiles deduced power of the Russian supersonic strategic Tu-160 bomber-raketonosetsa on new level, writes The National Interest.

The edition reminds that Tu-160 was developed in the USSR at the time of "cold war". It was the answer of Moscow to creation of the American heavy hardly noticeable strategic bomber Northrop B-2 "Spirit", however the Russian plane went further the former competitor.

As the author of article, at the heart of the concept of Tu-160 which is capable to gather speed to 2200 km/h notes, use of high speed lies, ability quickly to adopt the starting provision and to dump cruise missiles before the opponent manages to react.

During military and air operation of Russia in Syria Tu-160 let out the latest H-101 cruise missiles before never applied during operations, writes NI. Introduction in action of this type of arms does Tu-160 by especially dangerous opponent. Having the maximum take-off weight in 275 000 kg, Tu-160 is the largest and powerful military plane from ever existing, concludes the edition.