Medvedev allowed restriction of air transportation to other countries 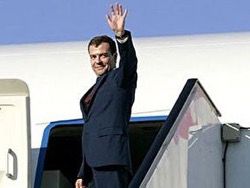 "I cannot exclude that in any situation we will be compelled to consider similar questions and in other directions, on other countries but while it is not made. It would be desirable to hope that it will not occur", – Medvedev at press conference reported following the results of the APEC summit.

According to him, "until there are no obvious problems, naturally, routes should not be closed".

"On the one hand, we should watch safety, but, with another, there should be rather accurate information that occurs though conversations on it (about restrictions of air transportation on other directions – IF) go", – Medvedev told.

"Similar recommendations (about a suspension of flights – IF) – they, really, sometimes arise. At the moment such decisions are not present, except the decision which concerns the Arab Republic Egypt regarding air transport", – he added.

Medvedev noted that rather often there are situations when the state recommends to the citizens not to visit other states for safety reasons.