Mi-38 there will pass certification in the current year 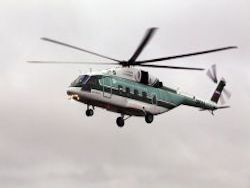 «Till the end of this year we should receive the category "B" certificate on the transport car, and in the first half of the year of the next year we will try to receive the certificate on the transport and passenger version, – the head of holding «Helicopters of Russia» Alexander Mikheyev declared to the correspondent of «The military-industrial courier».

Mi-38 in mass of 15 tons, tests which already go, consists on almost for 100 % from the Russian accessories, already interested the commercial organizations.

On Mi-38 some an assessment – one of the most expected cars in the class in the vertoletostroyeniye market.

According to Mikheyev the holding also plans to sign the contract on the Russian-Chinese helicopter until the end of the year. «The road map is already signed and responsibilities of the parties and as participants are defined are defined. Three parties participate in works – from our party of CB Milya, the Chinese party and Ukrainian "Motor Sich", responsible engines», – were explained by Mikheyev. The head structure which is responsible for design and creations of the helicopter is the Chinese party. The market is estimated at not less than 200 helicopters. The Ukrainian party participates in the project with the D-136 engine. It is remarkable that direct negotiations with "Motor Sich" are conducted by Chinese party which is the direct customer.

Is at holding and other plans. «We offered production Mi-14 renewal taking into account programs of development of Artika, – Mikheyev declared. He noted that Mi-14 will be undoubtedly interesting also state the customer.

Mi-14 the amphibian helicopter serially being issued in the 1980th years and delivered not only for needs of the Navy of the USSR, but also to foreign customers. It is a question of production of the Mi-14 helicopter upgraded according to the latest development. As the head of holding noted what to speak about renewal of production it is possible, if the order is not less than on 50-60 cars. This year the holding plans to let out over 240 helicopters.