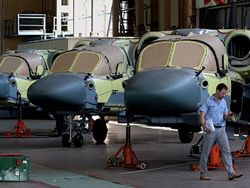 The perspective high-speed helicopter (PSV) developed in interests of the Ministry of Defence, will go to a series since 2022. The commander-in-chief of Aerospace forces (VKS) reported about it colonel general Victor Bondarev, reports TASS.

«This work goes at full speed, and in 2018 the demonstrator of this helicopter should depart. Then the completion of [works] – 2021, and since 2022 – a series of these helicopters. Speed – to 500 kilometers per hour», – was told by Bondarev.

He noted, what exactly such speed is set in the tactical specification on design of the perspective helicopter. «If it will turn out it is more, we will be glad. Naturally, this helicopter will solve all those problems which are solved now by helicopters of families of Kamov and Mile. It will take itself(himself) all the best», – the commander-in-chief explained.

On a past in the Zhukovsky air show situated near Moscow MAX-2015 was shown one of early demonstrators of PSV technologies – flying laboratory on the basis of the Mi-24 helicopter on which test the bearing screw of a special profile.

The PSV program (in commercial option moves ahead under RACHEL brand – Russian Advanced Commercial Helicopter) is started at the beginning of the 2010th years. Certified tests of the new car are planned by 2020. The multi-purpose helicopter potentially double (military and civil) appointments is intended for replacement of cars of Mi-8 family (Mi-17), and is planned to development at once in several versions, including passenger, search and rescue, patrol and medical. The car in mass of 10,5-11,5 tons should provide transportation of 21-24 people for the speed to 450 kilometers per hour. Range of flight with a normal pay load of 2500 kgs is defined in 900 kilometers.