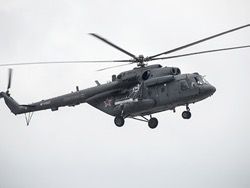 The first adapted for conditions of the Arctic the helicopter of the Mi-8AMTSh-VA type which is also known as "Terminator", will be transferred to the Russian military on November 25. About this TASS reported a source in the Russian delegation on the international salon Dubai Airshow-2015.

Experimental batch from five such cars for army tests былазаказана in February, 2014. Then military declared that the general their need for "Terminators" can reach 100 units.

The Arctic version (Mi-8AMTSh-AV) is created on the basis of the last updating of the Mi helicopter – 8АМТШ – In, equipped with new gas-turbine engines VK-2500-03, more powerful auxiliary TA-14 power plant and the updated avionics. The helicopter is created taking into account specifics of application in the conditions of low temperatures (from a minus of 40-50 degrees on Celsius and below) and limited visibility at performance of flights, including during polar night.

Mi-8АМТШ – the transport and assault helicopter from the Mi-8 family, equipped by arms complex (including operated rocket) and additional armored protection of a cabin of crew, and also an avionics complex for night flights. The car received the informal name "Terminator" after an air show in Farnborough in 1999 where it was shown in the export Mi-171Sh version.