Ministry of Transport opposed a ban of planes 15 years 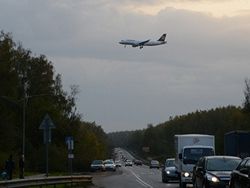 According to Interstate aviation committee, more often accidents occur to the aircrafts, which age less than 5 years.

The ministry of transport of the Russian Federation opposed an import ban for operation in Russia of planes 15 years are more senior. As representatives of the ministry declared to "News", «the international practice shows possibility of safe operation of aircrafts 30 years» are more senior. According to data of Interstate aviation committee (POPPY), the maximum number of accidents in the world occurs to planes, which less than 5 years. And with increase in age of VS the number of aviaincidents, on the contrary, decreases. Let’s remind that with the offer to forbid to use planes of foreign production 15 years in 2013 in the ministry are more senior Rosavitsiya addressed, and after crash of the Russian A321 plane in Egypt the first deputy chairman of committee of the State Duma on the industry Vladimir Gutenev sent the similar bill to the government.

In Ministry of Transport note that it is possible to maintain safely planes to which even is more than 30 have some.

– The international practice shows possibility of safe operation of aircrafts 30 years are more senior at the correct system of maintenance of the flight validity, – speak in the press service.

Besides, in department emphasized that «The Rosaviation repeatedly did not support the offer on restriction of age limit of VS». However, as wrote before "News", the Rosaviation sent to offer Ministry of Transport on improvement of system of safety of flights in Russia – in 2011 and 2013 (documents are on hand "News") twice. In the last letter as one of measures it was offered «to forbid legislatively import for operation in the Russian Federation at performance of commercial flights of those aircrafts which service life (operation) exceeds 15 years».

In Ministry of Transport emphasized that, statistically, "young" planes got to accidents more often.

– If to draw any analogies to the international aviation market, that, according to the statistical data received from POPPY, the maximum quantity of accidents in the world was the share just of the planes, which age less than 5 years. If to look in more detail at statistics, with increase in age of the plane the number of accidents and aviaincidents with it decreases, – told in the press service.

In the press service noted that a position of Ministry of Transport of Russia POPPY which in November declared that supports also the main thing for safety – the flight validity of the plane, instead of its age.

«Direct dependence between accidents of aircrafts and their age is not present. For the last five years number of accidents in the world, including Russia, with aircrafts passengers capacity more than 50 places identical to age planes till 5 years and over 30 years. According to available information, middle age of Boeing-737-500 planes maintained in the USA – 20,4 years, in Europe – 20,3 years», – were told in the POPPY message.

Besides, in Ministry of Transport consider inexpedient to create independent body of state regulation in the sphere of civil aviation. It also was one of Rosaviation offers to exclude duplication of control of airlines from Federal service on supervision in the transport and Rosaviation sphere and a message the coordinated and clear state policy.

– Association of all functions on the state control in one body in itself will not provide providing appropriate level of safety of flights. By standards and recommended practice of International Civil Aviation Organization (IKAO) it is not established to need of creation of uniform authorized body. Besides, association of functions on supervision, service and formations of a state policy will contradict the concept of administrative reform and will cause the conflict of interests, – speak in the press service.

Let’s remind that last week the first deputy chairman of committee of the State Duma on the industry Vladimir Gutenev sent to the government for receiving a response the bill of a ban of operation of planes of foreign production 15 years are more senior. The deputy suggests to make amendments to Art. 36 of the Air code of the Russian Federation.

Gutenev told that while on the bill from the government he did not receive a response (a position will be created within a month), but hopes that the conclusion will be positive because the draft document suggests not only to limit age of planes, but also деофшоризировать the aircrafts flying in the territory of Russia.

– It is a question of return to the Russian jurisdiction of those planes which are bought or are in leasing. That them registered in the Russian Federation, instead of on the Bermudas, – Gutenev explained. – This continuation of the decree of the president about an economy deofshorizatsiya. It is important, because as in Audit Chamber it was declared, by 140 billion rubles in a type of tax was half-received, because of that that the majority of passenger planes are in an offshore.

The analyst in the field of aircraft Vladimir Kositsky supported a position of Ministry of Transport, having explained that possibility of operation of the plane depends not on age of the aircraft, and from a set of factors – a resource of the aircraft, quality of its service, observance of terms of carrying out procedural works, observance of instructions on flight operation.

– Each plane has a resource which defines possibility to maintain its number of hours defined by the producer. The first planes of each new series (which yet do not use in air) pass resource tests, both static, and flight. All parts of the plane – wings, engines, a glider are round the clock tested. Loading is applied to all parts of the aircraft, comparable with that which he will test at operation on the earth (for example, at a ruleniye, running start and run) and in air during all phases of flight. Tests can last months and even years – before emergence of fatigue failures of materials of which the aircraft is made, for example, microcracks. Such time which the plane can safely be maintained is defined by image, – told Kositsky. – For an example, the resource before write-off at the Il-86 plane makes 30 thousand hours, and at Il-96-300 – already 60 thousand. This resource is appointed by the producer and means that the plane at observance of all norms and the service regulations, all terms of service is suitable for work this term.

According to Kositsky, at a thoughtless approach to "kill" any equipment it is possible very quickly, and it is possible to maintain tens years without accident.

– It is important to check in time a vessel, to use certificated and thus new spare parts. Fuel at operation also should correspond to all norms and the standards defined for operation of this plane, – he told.