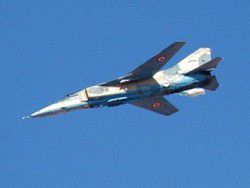 The Syrian governmental armies continue отвоёвывать at terrorist group «Islamic state» the increasing territories. They managed to beat off the large automobile route connecting the province of the Boor and the economic capital of the country – the city of Aleppo.

From air approach is supported by the Russian aircraft, and also the Syrian planes, many of which carry out fighting tasks in spite of the fact that he is more than 50 years old. In more detail about "veterans" of armed conflict in Syria – the correspondent of RT Murad Gazdiyev. Armed conflict in Syria lasts nearly five years, and military and air forces of the country for these years suffered an essential loss. But the Syrian pilots still carry out fighting tasks, including by planes which were developed more than 50 years ago. One of examples – MiG-21. In many countries he can be seen only in a museum, in Syria it consists on arms of the Air Force. He made the first fighting flights in the sky over Vietnam. It is one of the most widespread military planes in the history. It is simple in management and service, and bombs are made for it in the Syria. The rust and a rough surface give out age of a fighting vehicle.« It is the powerful, strong and reliable plane. It carries out all necessary tasks. On the average we fly on it on 3-4 times a day», – commented on RT the Syrian military man. According to the pilot, he accumulated 2,5 thousand flight hours, that is spent more than 100 days in air.

MiG-21 – not the unique rarity on air base. On arms of the Syrian Air Force MiG-23 created in the sixties of the last century consists also.

During reporting shootings the correspondent of RT Murad Gazdiyev watched plane landing which, apparently, returned on base after bombing in a neighborhood of the city of Morek which was grasped recently by dzhikhadist.

As the correspondent in what on military base there was no shortcoming, so it in enthusiasm noted.

«We work in a mode of full combat readiness, we execute orders and in the afternoon, and at night. Pilots even compete among themselves for the right to take off on this or that task», – one of pilots shared with RT.

Near hangars there is that locals call «a cemetery of infernal guns» – the self-made artillery withdrawn from fighters. The Syrian Air Force accuses of use of inexact arms, such as bochkovy bombs. Meanwhile dzhikhadist direct horror at the peace population with the help of «infernal guns» which shoot the gas cylinders filled with nails and explosives. Thus their dalnoboynost reaches 5 km, and it is necessary to speak about accuracy at all.

«We still do not understand, why these dzhikhadist want to destroy our country. To us it is also unclear, why the western powers misinform people that here occurs», – told RT the Syrian pilot.