Planes will force to be guided on neutron stars 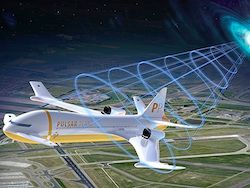 Now in civil and military aviation for navigation use inertial systems which calculate position of the plane on the basis of data about its movings from a take-off point, and also satellite systems GPS and GLONASS.

In new system for determination of location of the plane pulsars – rotating neutron stars from which radiation of different types comes to Earth in the form of periodic splashes will be used for the first time.

To use pulsars for navigation scientists solved because their electromagnetic impulses have unique and accurate periodicity which varies for different space sources from 1,4 milliseconds to five seconds.

The navigation principle on pulsars will be similar to GPS, with that only a difference that the exact provision of pulsars is not known. Location of the plane will be calculated on the basis of signals from three pulsars and change of frequency of their pulsation in process of aircraft moving.

For correction of calculations researchers plan to use a signal from a separate pulsar, and radiation from one more pulsar will be used for time correction. Accuracy of calculations will be corrected by means of inertial systems of navigation.

Electromagnetic radiation of pulsars covers quite wide range and is fixed constantly almost from any point of Earth. For work of such navigation system it is not required creations of new land infrastructure.

Advantage of use of pulsars to navigation also is potential invulnerability of system for malefactors. Within the PulsarPlane project scientists should develop some technical solutions, for example, to design aerial and to integrate them into a design of planes, and also to create accepting devices and algorithms of processing of radiation.