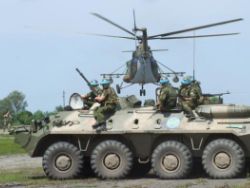 The Russian army began large-scale fighting doctrines with firing practice on in the Rostov region and Stavropol Krai. In the Air Force vertezhegodny doctrines of the Russian Federation will destroy an air landing of the conditional opponent, and crews of helicopters will give fire support to motor-shooting and tank divisions.

Doctrines of similar scale with attraction at the same time two flight military units are carried out two times a year. Military, carrying out of educational and fighting tasks, operate within a uniform plan, the press service of the Southern military district of Russia reports on Tuesday.

Before flights and practical start-up pilots have training 10-hour additional preparation on 3D-exercise machines – simulators of flights. They should make fighting start-up of uncontrollable rockets and firing from 23-millimetric guns and 12,7-millimetric machine guns on the various purposes on the range Arzgir.