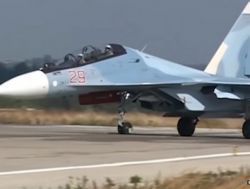 The Al-Hayat newspaper reported that Russia cancelled large-scale military maneuvers in east Mediterranean because of a position of Israel.

Russia intended to carry out maneuvers during which five of six routes of approach of civil planes to Lebanon should be blocked. The Department of Civil Aviation of Lebanon agreed with the Russian requirements.

Maneuvers should last three days. Maneuvers were cancelled after the USA informed Russia on carrying out the Israeli doctrines on border with Lebanon.