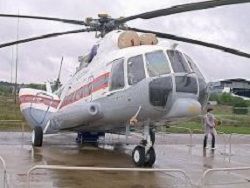 The frame Russian-Chinese cooperation agreement according to the project of the advanced heavy helicopter is signed following the results of a meeting of the president of the Russian Federation Vladimir Putin and the chairman of the People’s Republic of China of Tszinpin’s SI, reports "Interfax".

The signatures under the agreement were put by the general director of JSC Vertolety Rossii Alexander Mikheyev and the chairman of the board of the Chinese corporation of an aircraft industry Leang Tszemin.

Mikheyev noted that the new car will not be analog or further development of the Russian heavy Mi-26 helicopter.

"This helicopter will be specially developed for the Chinese market, for performance of those missions which are formulated by the various ministries and departments of China. First of all the Ministry of Emergency Situations", – Mikheyev told.

In turn, the Deputy Prime Minister of Russia Dmitry Rogozin declared that the engine will be made for the Russian-Chinese heavy helicopter in Russia, instead of in Ukraine, reports RIA Novosti news agency.

"The Russian mechanics left on unique technological decisions which will allow us not to depend on anybody. And the engine for this heavy helicopter will be created in the Russian Federation, that is not in Ukraine as earlier, namely in Russia", – he told.

"Helicopters of Russia" carried on some years negotiations on joint development of the heavy civil helicopter with the Chinese party. Alexander Mikheyev told earlier that the new helicopter will be developed for performance of various missions of the ministries of China, first of all, the Ministry of Emergency Situations.

Providing necessary conditions for implementation of certain infrastructure projects, in particular, power, road-building etc. where usual transport it is difficult to carry out delivery of these or those cargoes within loading range becomes one of problems of this helicopter also.