Silt-96 – chance to escape from a trap in domestic aircraft 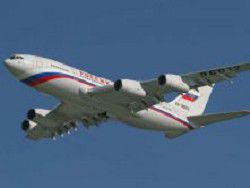 The plane crash over the Sinai Peninsula generated the next wave of disputes on how it is necessary to develop domestic aircraft industry. A number of planes from the Soviet past was stopped by flights a few years ago, most "untwisted" from new projects became "Superdzhet", the account to order which went on the second hundred is the best result for domestic planes of a Post-Soviet era.

But it is the liner short-range. One more project which "just about" should be embodied in reality – medium-haul MS-21. However, in a niche of long-haul airliners there is a notable failure – hopes of the joint plane with the People’s Republic of China can come true only after 2025. And till this time it is necessary to reconcile to a preponderance of "Boeings" and "Erbasov"? Or there is a possibility to fight for the share of an aviation market? Details – in the material Nakanune.Ru.

Silt-96 – actually unique shirokofyuzelyazhny long-haul domestic liner. In the late eighties its development began on the basis of legendary Il-86, in 1988 the plane made the first flight. Its production began in 1993 both, in fact, proceeds and now, but in the extremely limited scales – all 28 aircrafts were made. Four planes of this type were equipped as a Board No. 1, four more standard Il-96-300 are on service in presidential aviagroup. Three of 28 planes even were given for export – they were got by national airline of Cuba.

However that is good for the president – for some reason it is not necessary for a commonalty. In any case, all three air carriers at which is in fleet of the car of this type, placed them in storage – "Aeroflot", "Flight" and "Domodedovo Airlines".

Did not add popularity to the Russian liners and former head Minpromtorga Victor Khristenko who in 2009 declared that Russia does not need to make such planes as in the world already there are their direct competitors. The federal official declared that Il-96 – "the unpromising plane", and in this segment of the market of Russia "it is senseless to compete with the international leaders" – the European company Airbus and the American Boeing. Besides, the Russian minister declared then that the decision is made to null import duty for passenger planes capacity more than 300 people – in this segment is Il-96-300. And with the western companies, according to the head of the ministry of the industry, "a lot of work", in particular is conducted, "the Russian side delivers considerable volume of titanic designs". Such position of the head of the ministry which is responsible for development of the domestic industry, should be perceived, to put it mildly, without surprise – extreme force the state lobbyism – to blacken own industry and completely to open doors for competitors with whom all the same "is useless to compete". Natural delivery of national industrial interests which later few years actively was supported also by president Medvedev, having forbidden operation of An-24, Yak-42 and Tu-134.

However, neither Medvedev, nor Khristenko were not original in similar statements – they only finished to the logical end the aviation "doctrine" formulated by "the father of liberal reforms" Egor Gaidar.

"I heard its performance when he answered a question of the journalist of development of aircraft construction that all this demands a large number of means, finance, big intelligence, a large number of plants, accessories, the equipment, electronics should be developed, to the electrician, a radar-location is to us will not go. He told that agreed with "Boeing" which will provide us any number of the planes. And here this foolish joke of the prime minister led to that it became a state policy for decades forward. In 25 years civil aircraft construction to such an extent was destroyed that we carry out 97 % of a passenger turnover by the western planes", – told Nakanune.Ru the independent aviation expert, the deserved pilot of the USSR Oleg Smirnov.

It reminded that else in 1990 under the authority of the Ministry of civil aviation there were 13,5 thousand aircraft which provided transportation of 143 million passengers in a year and processed 100 million hectares of the farmland. All these devices were a domestic production, besides, the Soviet planes were used in 40 more countries of the world. However, the consistent policy of the state led to that hundreds planes stand and decay at fences, and airlines buy foreign "aviastuff".

"Our prime minister is the first prime minister in the world which publicly completely discredited our aviation equipment, having told that all this junk, it is unsafe, it is bad, it eats a lot of kerosene etc. And hundreds planes with resources rose to a fence and decay – any country of it did not do in the world. Any state does not consider itself so rich that planes with resource to throw out under a fence. But we fine helped America and Europe, in a mass order buying their planes, and they applaud policy of our government", – the expert notes.

Meanwhile, according to developers, Il-96 was not such "ugly duckling". The criticism concerning its economic unprofitability, technical defects was, but it were the working moments which quite on forces was to correct. Moreover, even experts of "Aeroflot" recognized competitiveness of the liner.

"With the Perm engines first seriously were worn out, but now it already quite decent cursors. Then received the 2nd category of landing, and already the plane has the 3rd, then finished it on a resource… I always considered: let the equipment will be slightly simpler, but the. On Il-96-300 there was only one import system – inertial navigation, similar we did not manage to make. And as to profitability, here the letter of the operator to chief designer Il-96-300 from 8/2/2011 years. There it is told:"… operation of planes Il-96-300 in JSC Aeroflot in the conditions of the competition to long-haul planes of foreign production proves the commercial appeal both on loading, and on a departure regularity in flight", – the founder told in recent interview Il-96 Henry Novozhilov.

The designer whom and today, having celebrated one of these days the 90-year anniversary, continues to work in "Ilyushin", noted that Khristenko’s decision was simply fantastic, considering that the plane was in a mass production, had all necessary certificates, a maximum level of reliability and competitiveness.

"Plane repeatedly резервирован. Refusal of any its system does not lead to a situation above, than only complication of conditions of piloting. Silt-96 at that time was already in a mass production. Silt-96Т without special problems, having only made an interior, it was possible to turn in passenger on 380-400 places. In the sizes it same, as the Boeing-777. On Il-96 it would be possible to put two built-in ladders as on Il-86 that it flied and sat down at any airports", – Novozhilov emphasized.

Words of the designer are confirmed also by such fact – for all the time of operation of planes of this type there was no flight incident in which would be lost though one person. This actual proof of margin of safety and technological level.

Only 25 years when the USSR provided almost the half-world with the aviation equipment later, we reached such condition when collected more, than half from foreign accessories "100" it is considered Dry Superdzhet any serious achievement of the Russian aviation industry. Silt-96 it was let out 28 in 25 years, Tu-204 – 78 units, and that it is less than other cars. Nevertheless, even it encourages – let and in small amounts, planes are issued, it means that there are technologies, shots and capacities. The same Il-96 is issued in cargo updating, and at the beginning of this year the Ministry of Defence sounded interest in toplivozapravshchik on the basis of one of plane updatings.

Well and the rate on foreign planes already showed, to what it leads. And business not only and not so much in accident of French "airbus" of A321 over the Sinai Peninsula.

"We got to a trap which of category economic passed to category of national security. We take these planes in leasing for dollars, we provide maintenance, we buy thousands spare parts for dollars, repairs we do abroad for dollars, we learn to fly on exercise machines and we learn to fly pilots too for dollars, engineers we prepare for dollars, and tickets we sell for рублики, and рублик fell off, and today there is no revenue of airlines for ruble converting in necessary number of these huge currency payments. All companies at us, to put it mildly, very much in unreliable situation, and debts of "Transaero" appeared very heavy", – Oleg Smirnov emphasizes.