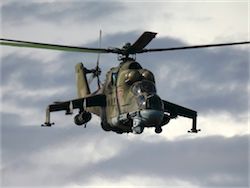 The Ministry of Defence of Slovakia begins large-scale sale of aviation equipment of the Soviet production. On sale 15 helicopters are already exposed, they will be followed by planes MiG.

Any firm having the license for operations with military production can get 15 helicopters of the Soviet production of the types Mi-2 and Mi-24 at the Slovak military man of department, reports RIA Novosti news agency. Sale of rotary-wing cars is carried out within gradual complete modernization of the Air Force of Slovakia.

In the next three years fighters MiG-29 will be removed from arms, they also will be exposed on sale. Instead of them the aviation equipment, used in NATO countries will be acquired or leased. The Slovak authorities first of all consider option with leasing of the fighters JAS of 39 Gripen at the Swedish company Saab.