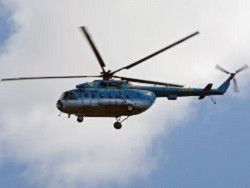 Activists of ONF on Sakhalin plan to address to local authorities with a request to clear a situation concerning purchase of two Mi-8 helicopters for 980 million roubles, the organization press service reports.

As it is noted in the message, after the demand for acquisition of helicopters in 2013 officials of the region explained need of purchase "needs of medicine and adjustment of the steady transport message with Kuriles". However after arrival first Mi-8 was transferred in using лесоохране though on it there is no special equipment. The second helicopter which did not arrive yet to Sakhalin, in general belongs to a business class.

"Thus, any of helicopters does not correspond to earlier sounded requirements of the minister of transport and a road economy of the Sakhalin region", – the cochairman of ONF in the region Andrey Fugenfirov declared.

According to him, on the island multipurpose helicopters are necessary, which can carry out cargo and passenger functions, and also help with emergency situations.