The first results of interpretation of black boxes A321 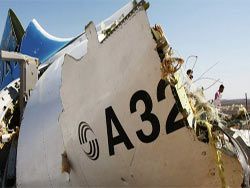 Today Kogalymavia airline (TM Metrojet), whose aircraft broke on Saturday together with 224 people onboard, held press conference. «External influence could be the unique reasonable cause of destruction of the A321 plane in air», – the deputy director general of airline on flight work Alexander Smirnov declared. Meanwhile Reuters reports about the first results of studying of black boxes.

The A321 plane was not exposed to external influence, and the pilot did not report to the dispatcher about any malfunctions before the liner disappeared from a radar, reported the source of Reuters familiar with the first results of studying of «black boxes», reports RBC.

The agency also reports referring to the Egyptian participants of investigation that the plane was not exposed to external influence.

The Kogalymavia company has other point of view.

– There is no such refusal which could take to that the plane collapsed in air. In this case the plane collapsed from blow about the earth. А320 very reliable plane, automatic equipment let’s leave on big overloads even at a gross blunder of the pilot, – Alexander Smirnov told.

He noted that mechanical influence aboard the plane could be the unique cause of destruction of the plane in air. Thus Smirnov made a reservation that the commission into which specialists of the Federal Service for Transport Supervision and Rosaviation enter should do conclusions. What sort it was mechanical influence, Smirnov refused to specify and urged to wait results of investigation.

In airline declared that do not adhere to any versions, but completely exclude possibility of malfunction of a technical vessel and a mistake of pilots. The plane took off precisely according to the schedule that says that the crew did not undertake any additional actions. Other crews did not complain of any malfunctions, declared in "Kogalymavia" management. Before a departure the board looked round technicians of "Kogalymavia" on standard procedure, added in airline.

The deputy director general of Metrojet on engineering support, in turn, assumed that «at the moment of the beginning of development of a catastrophic situation the crew completely lost working capacity». It that fact, according to him, speaks that the crew did not undertake attempts to contact land services.

Upon transition of the A321 plane of Kogalymavia airline to falling over the Sinai Peninsula, the crew completely lost control over management, the deputy director general of airline on technical and production questions Andrey Averyanov declared to journalists.

– Upon transition to falling the A321 plane, most likely, received considerable constructive damages which did not allow to continue flight. Also it is visible, in this regard during the same moment of the beginning of development of a catastrophic situation the crew completely lost working capacity, these can explain that there was no attempt to contact and report on an emergency onboard, – Averyanov at press conference in Moscow told.

The Kogalymavia airline will do the utmost to receive real results of investigation of the reasons of crash of the Russian Airbus-321 airliner over Sinai, the general director of the company Alexander Snagovsky declared to journalists.

– First of all, the company management, all personnel of the company presents condolences. There are no words to show our feelings and our pain, we cannot even pick up them. The airline does everything to help relatives and to receive real results of investigation which will be finished, – told Snagovsky.

– Let’s wait official results of investigation, and the commission will tell us about its results, I would not like to be engaged now in conjectures, it is outside my competence, – Smirnov at press conference told.

The Airbus-321 liner of Kogalymavia airline which on Saturday made flight from the Egyptian Sharm el-Sheikh to St. Petersburg, broke on Sinai. Onboard there were 217 passengers and seven crew members. All of them were lost. Accident became the largest for all history Russian and Soviet aircraft.