The helicopter made rigid landing in the Yamalo-Nenets Autonomous Okrug, one person suffered 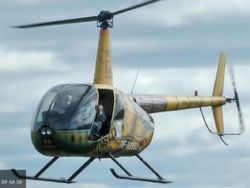 Incident happened in the Purovsky region of the Yamalo-Nenets Autonomous Okrug on Tuesday at 10.18.

«On July 21 at 10.18 (Moscow time) in Control center in crisis situations the message that in the territory of the Purovsky area in 25 km from the city Tarko-Sal the Robinson S450 helicopter, airlines «Light Eyre» as a result of a strong lateral wind made rigid landing» arrived, – reported in the Ministry of Emergency Situations.

Onboard the helicopter there were three persons, one of them as a result of incident got a basin bruise. Damages were received also by the aircraft, it broke blades and a tail beam.

«To a scene the sanaviatsiya helicopter onboard which there are doctors and the Ministry of Emergency Situations operative group» is directed, – is told in the message.

As report mass media, at the moment of happened the helicopter made gas pipeline flight. Information on victims did not arrive. Details of incident become clear.