The military aircraft of the USA will receive fuel from algas 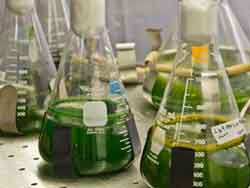 To receive fuel not from oil and gas, and from biological resources. Such purpose is put by the Pentagon to the scientists working in the field of alternative power sources. Stocks of hydrocarbons in the USA are too limited. Therefore fuel for the military infrastructure, received of a biomass, will help to remove resolutely many problems actual for ground forces, fleet and aircraft.

The special The BioFuel program there was a receiving the production guaranteeing conversion of vegetable oil in high-quality fuel which parameters are similar to hydrocarbonic structure of JP-8. On it rockets of the USA are started.

The project is realized by scientists of University of Northern Dakota, some other educational institutions, institutes, research laboratories. Development for all hundred percent is financed by the Ministry of Defence of the USA.

As a source of a biomass seaweed which very quickly grow on shoal in special farms at the coast are chosen. The Pentagon signed a number of contacts in the total cost in 35 million dollars with the Science Applications International Corporation and General Atomics companies which should perform necessary works for processing of algas with a view of receiving fuel for planes and the ships.

The Chevron corporation and National laboratory of renewables of the Department of Energy of the USA intends to find out precisely the real efficiency and prospect of introduction of technology of development of combustible materials from algas. For purchase of hydrocarbons for the American Naval Forces and the Air Force now are spent billion dollars annually. Meanwhile only the aircraft of the USA consumes in a year not less than 9,07 billion liters of kerosene for total amount in 6 billion dollars.

Military analysts seriously think over processing in fuel of a waste of a woodworking. Chips, straw, peat briquettes and a residue remaining after production of oils in the food industry – all this can become a source of cheap raw materials for future industry delivering qualitative biofuel.