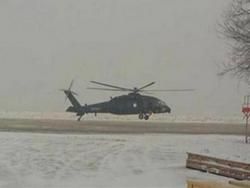 Now China develops helicopters of new type, relying on own forces. It was declared today by the representative of the Ministry of Defence of the People’s Republic of China Geng Yanshen at press conference.

Earlier there was the first photo of the latest Chinese Z-20 helicopter. Z-20 represents the average helicopter with the one-screw scheme with the steering screw, two GTD and the three-basic chassis.

Z-20 in many respects repeats or even copies the American prototype of Sikorsky UH-60 Black Hawk which was bought earlier for Armed forces of China. During time «honey period» in the relations between the People’s Republic of China and the USA (the 1980th years) Beijing bought 24 S-70C Black Hawk helicopters which are until now used by NOAK as transport cars. Some observers call possible emergence of the Chinese clone of the American helicopter «an overdue surprise».