The Pentagon made laugh the Russian experts with a new bomber 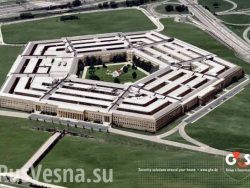 The Pentagon is going to spend 80 billion dollars for a new strategic bomber. It is already known, who will manage so stunning contract, is "Nortorp Gruman", developers stealth bomber B-2.

In the history so much yet did not cost any plane, notes Zvezda TV channel.

In the USA this expenditure called a reliable investment on the closest fifty years.

Technical characteristics of a perspective bomber are coded. The plane is created according to the aerodynamic scheme «a flying wing». It is capable to bear nuclear missiles.

And the main highlight, according to generals of the Pentagon, – the plane will be allegedly invisible" to a radar of the opponent.

However the Russian experts doubt rationality of investments. Founders assure that invented new paint – on the stealth technology which does the plane impregnable. But such covering in the rain exfoliates, the object right there gets on a radar, and further – a trick of air defenses systems, experts note.

Planes received the name LRS-B – that is Long Range Strike Bomber that in transfer – «A distant shock bomber». It is planned that it will come in the stead of the Spirit V-2 bomber which, however, too did not justify hopes.

According to the American military experts, at new "bomber" every chance to repeat destiny there is no time very perspective B-1 and B-2 which still could not force out the obsolete heavy B-52 bomber which began flights in the 55th year of the last century from a holder.

And that is surprising, still in the American army anything did not think up better, experts consider.