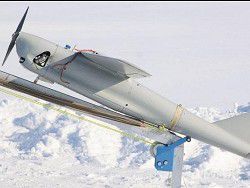 The Russian BPLA "Sea eagle-10" and "Outpost" will carry out various educational and fighting tasks in the Arctic region.

According to the chief of the press service of East military district Alexander Gordeyev, the group of the Russian pilotless aircraft (BPLA) started performance of educational and fighting tasks in the Arctic. Gordeyev noted that the BPLA group is created in the Chukchi autonomous region.

Such devices participate in educational and fighting operations, as "Sea eagle-10" and "Outpost". Devices will carry out such tasks, as control of combat training of divisions in the Arctic zone, check of a condition of objects of military infrastructure, and also air patrol.

Gordeyev added that shortly ranks of the Arctic division of BPLA will fill up more upgraded and modern aircraft by means of which it will be possible to carry out more complex challenges at the distance exceeding 1,5 thousand kilometers.

The devices "Sea eagle-10" and "Outpost" are multipurpose pilotless complexes of the Russian production by means of which supervision over various objects in remote districts is conducted.