The Syrian fighters killed by aircraft bury in a toilet 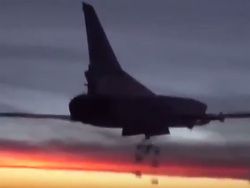 In the ranks of the Syrian bands the panic began. The Syrian fighters after the massed aviation blows of the Russian VS throw off corpses of simple terrorists in sewer holes. Wounded and the killed a rank take out at night above – to hide real losses from ordinary fighters.

By the way, among the killed there are representatives of terrorist "elite": these are the field commanders Abu Nurlbagasi, Mukhkhameda ibn Hayrat, Al-Okab acting around Aleppo. About it on Thursday, November 19, the chief of the Head operational management of the General Staff of VS Russian Federation, colonel general Andrey Kartapolov told.

According to Kartapolov this time the massive attack has on "manpower". The blow was such force that terrorists did not manage to bury victims according to norms of Islam. As a result, field commanders went on radical measures and began to dump bodies of simple fighters in sewer holes.

Besides, to avoid a panic among terrorists, leaders of gangs made the decision quickly to evacuate the killed and wounded. It becomes, according to Kartapolov, in a night-time. So, for example, it is already known that on the night of November 18 terrorists from a band "Sham Taliban" took out a body of the commander Ahmad Ziyaya destroyed around the mountain of Dzhubb-el-Akhmar.

It is established that to the fighter with "Abu Obeyd’s" call sign an objective is reserved to take out corpses from the southern suburbs of Aleppo to the area of the settlement of Han-Eel-Asal… Fighters recognized elimination as a result of bombing attacks of the Russian aircraft of the field commanders Abu Nurlbagasi, Mukhkhameda ibn Hayrat, Al-Okab acting around Aleppo, – the chief of the Head operational management of the General Staff of VS Russian Federation told on Thursday.

Cases when fighters simply refused to be at war are as a result already fixed.

So, fighters of field commander Abu Masjab as Suri from group structure «Dzhibgat an-Nusra» did not carry out of a task of destruction of divisions of armed forces of Syria near the settlement Deir-Hanna. The field commander with a call sign "Abu Husan" broke the order of the management and refused to be put forward with the group to the area of the settlement Tell-Bisa of the province Homs, – Kartapolov summed up.

On November 19 the Air Force of Russia struck the third massed aviation blow to illegal paramilitary groups in Syria. As a result of blows are destroyed: headquarters, 3 warehouses fuels and lubricants and ammunition, plant on production of explosives, command point, a workshop on production and repair of mortars, and also 3 large oil complexes on oil refining, station of pumping of oil.

As already earlier wrote "MK", in many respects such results managed to achieve by means of the latest weapon. So, in Syria the new cruise missile which earlier publicly the Ministry of Defence did not show was noticed. According to experts, this copy is similar to the perspective development of the X-101/102 cruise missile (KR) which quite recently has finished tests.

Sources of "MK" say that with high probability H-101 is equipped with a certain optiko-electronic system of correction of a trajectory with television prompting at the last stages of flight. According to them, the deviation from the purpose at this rocket does not exceed 6-10 meters, and for its option in nuclear equipment – 100 meters.