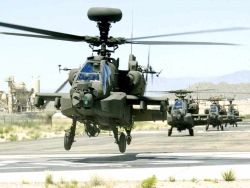 The Iraq-Syrian branch of "Al-Qaeda" declared capture of the city of Falludzha. But how it was bitter to the Pentagon to observe black banners of "Al-Qaeda" over the city for which in due time the American marines twice battled, United States Secretary of State John Kerri excluded return of the American armies for the help of the Iraq army.

Within the military help of the USA for the sum of 14 billion the dollars, begun since 2005, Iraq got recently 75 Hellfire air states tactical missiles and 10 prospecting bespilotnik of ScanEagle, but their delivery will come to the end only with spring of 2014. In Iraq also remain 200 American military advisers. Americans stake on the help to Iraqis in obtaining operational prospecting information for high-precision defeat of groups of fighters.

Besides, Iraq received the USA left after a withdrawal of troops the educational equipment, small arms, vehicles and other property. Since 2003 of the USA spent for restoration of Iraq by 60 billion dollars, including 20 billion were spent for creation from scratch the Iraq army and police. As report US authorities, Iraq informally asked to renew flights of the American bespilotnik over the territory.

In October of last year the prime minister of Iraq Nouri al-Maliki (Nouri al-Maliki) visited Washington, but could not agree about delivery of shock AH-64 Apache helicopters (on a photo) and other arms which would be used directly against terrorists. Permission was given only on delivery of the fighters F-16 and air defenses systems. Sale of "Apaches" still is on consideration in the Senate, and during this intermediate period Iraq buys the Russian helicopters Mi-28 and Mi-35.

For many years the Pentagon publicly declared that bears responsibility for formation of new Iraq security forces regarding training of staff and equipment by equipment and the weapon. Nevertheless, the Iraq army and police are still penetrated by sectarianism, incompetence and corruption, suffer from continuous political disagreements in the country. Iraq still is not the uniform state and has «really no national government», and in the long term if the effective help from the outside is not rendered, it can appear in the face of «deeper civil conflict», the expert of the Center of strategic and international researches Anthony Kordesmen (Anthony Cordesman) believes.