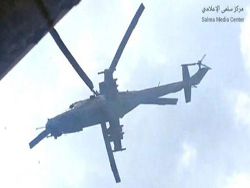 Military of the various countries of the world are surprised with level of preparation and professionalism of the Russian pilots of shock Mi-24P helicopters as a part of the limited military contingent in Syria.

The Russian shock Mi-24P helicopters are actively used for aviation take the Syrian armies during offensive operation in the north of the country.

Experts especially note level of professionalism and readiness of the Russian crews of helicopters which make fighting departures at extremely small heights.

It should be noted that the Russian helicopter pilots act in the conditions of saturated use of antiaircraft guns of calibre from 12,7 mm to 57 mm.

In addition it is known about a large number of mobile surface-to-air missile systems of the Soviet and Chinese production on arms of fighters of resistance and fighters.

In distinguish from the Syrian colleagues whom I carry out fighting departures at height to 5 km and alone, Russian Mi-24P act in pairs on extremely low heights. It should be noted that on arms of the Syrian army there is an export option of the shock Mi-24 helicopter under designation of Mi-25.