Three commanders of IGIL left the Middle East in coffins 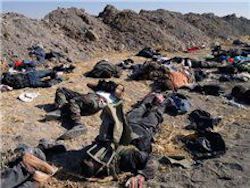 The terrorist group the Islamic state recognized elimination of three field commanders of the fighters in vicinities of Aleppo under blows of the Russian aircraft.

Such commanders, as Abu Nurlbagasi, Mukhkhamed ibn Hayrat and Al-Okab are destroyed.
Terrorists sustain big losses, so there is a lot of corpses that the management made the decision not to bury a body of simple fighters.
Now them dump in the sewerage, thereby breaking norms of Islam.
Wounded and corpses of commanders try is reserved to take out from a zone of operations to a night-time to try to hide scales of losses.

The Russian VKS, meanwhile, day by day set up records on fighting departures.
On the average in day at least two hundred fighters are killed.
Efficiency of the blows put by the Russian aircraft, is estimated on the basis of the data of objective control received from planes and pilotless aircraft.
Terrorists panic and desperately support from the management demand.

Many without having waited supports, run from a battlefield under знамёнами the Syrian opposition or changing clothes in female dresses.
Islamists are morally broken, the Russian aircraft gets them even in the deepest and strengthened bunkers.
To fighters not to get the Russian planes by means of PZRK, blows are made from heights inaccessible to these arms.
The high-precision arms solve the main problem – deprive of terrorists of command, after all the former commanders of armies of Syria and Iraq, that is the skilled military posing the greatest threat direct IGIL groups.
To the western journalists everything is more difficult to lie.

VKS of Russia in two months were destroyed by many times more objects of infrastructure, manpower and equipment of terrorists, than the western coalition in two years.
Such successes cannot be hidden, thus the western propagandists do not manage to discredit Russian pilots.
Real examples of losses among local population or opposition from the Russian aircraft simply are not present.