Whether Lukashenko can beat off from the Russian air base? 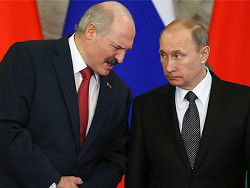 Placement of the Russian air base in Belarus will be one of subjects of negotiations which will carry out on November 26 in Moscow Vladimir Putin and Alexander Lukashenko.

The assistant to the president of the Russian Federation Yury Ushakov reported about it to journalists.

– On this subject there were some rounds of negotiations, obviously, this subject up to the end is not closed and will be discussed top-level between presidents of two countries, – the assistant to the head of Russia told.

Whether it will be possible to Lukashenko to refuse to Putin?

All hope of IMF

– At Putin not so already and there are a lot of arguments, – political scientist Ales Logvinets considers.

According to him a bargaining chip Kremlyam in negotiations with official Minsk is money.

However, according to the expert, Belarus has a real hope of the credit from IMF at which allocation political factors will be considered.

– Now Lukashenko tries to "sell" a question of absence of air base on the West. From this point of view, the Belarusian authorities aspire to show that are ready not to come under to the Russian influence, – the analyst notes.

He also emphasizes that from the point of view of geopolitics, Moscow will not begin to wage war at the same time against Kiev and Minsk, but only against someone one.

Putin will not recede

Political analyst Roman Yakovlevsky considers, the question with placement of the Russian air base is solved.

– Difficultly to itself to present that Putin who gave an assignment to the government to work all nuances with this base, will turn off everything back, – the analyst speaks.

According to him, now it is not clear yet: what will be this base.

– Degree of dependence of Minsk from Moscow is so great that in the Kremlin is actually solved: to base to be. All question in its napolnyaemost and cost. It is not known, for example, how many will receive Belarus as a rent, whether many workplaces will be created by base, – the analyst notes.

The expert does not exclude that in the territory of Belarus can appear not only the Russian planes, but also rockets.

– There are obligations within the so-called Union State which is not the subject of international law. Therefore can sign everything, and spit they wanted on opinion of the others, – the political analyst considers.

He notes that one of the main factors of need of this base, according to the Russian side, the small raid of hours and weak professionalism of the Belarusian pilots is.

– And the Belarusian budget does not pull on purchase of planes at Russia and the maintenance of own aircraft. In turn, Russians free of charge will not give us planes, – the expert emphasizes.

According to the analyst, in the Russian management the thinking now dominates: the more basic bases, the better.

– In the Arctic Moscow proves base opening by economic interests, and in Belarus – expansion of bases of NATO in neighboring countries. But who is going to attack Belarus? – the expert asks a question.

It is sure that the Russian base in Belarus will be ex-territorial.

– She will not submit to the Belarusian laws and to Lukashenko of it is afraid, – Roman Yakovlevsky emphasizes.