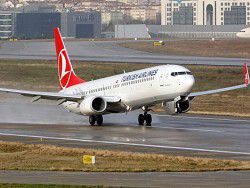 The plane of Turkish Airlines airline which was carrying out flight from New York to Istanbul, landed in Canada because of explosion threat.

As report news agencies, landing took place in the international airport of Halifax successfully, nobody suffered.

Aboard there were 256 people, all of them were evacuated.

The police now works at a scene. The salon and luggage are examined by cynologists with dogs.

As reports ABC News TV channel, threat was received, when the plane was already in air. The police began search of the person who has reported about a bomb.

Several days before the plane of Air France airline flying from the USA to Europe, also sat down in Halifax because of the message on explosion threat. Bombs onboard then it was revealed not.