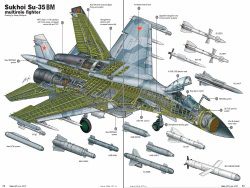 Russia and China, according to head "Rostekh" Sergey Chemezov, carried on «long negotiations on delivery of Su-35 to China» during which Chinese bargained not worse than brisk Odessa torgovka on the Supply.

Effective actions of the Russian VKS in Syria, apparently, pushed Beijing to the conclusion of the transaction, because of fear that somebody will manage to outstrip them in this question. One of these days the largest Russian-Chinese contract on not less, than two billion dollars on purchase of twenty four multipurpose fighters Su-35 is signed. Thus, Chinese become the first foreign customers of these Russian planes.

For the first time the Chinese military designated the interest to Su-35 in 2008 during aerospace salon Airshow China. Then the commander-in-chief of the Air Force of China colonel general Hsu Tsilyan at the stand of the "Sukhoi" company familiarized with possibilities of the fighter and estimated its flight and tactical technical characteristics. And in 2011 of the Ministry of Defence of the People’s Republic of China officially addressed in Federal service on military technically cooperation with the offer on purchase of Su-35. At the end of 2012 the preliminary agreement was signed, but three more years were coordinated technical and financial conditions.

In particular, pro-slipping was connected with that, having decided on quantity of acquired Su-35, China demanded to make changes to shape of the plane: in particular, to equip a cabin of the pilot with the avionics. According to the top manager of one of the aviation industry enterprises, this contract does not mean license production of planes in the territory of the People’s Republic of China, that is the customer will receive planes already ready for operation.

Now Su-35 consist only on arms of the Russian army: on terms of the contract from 2009 of the Air Force of the Russian Federation should receive 48 cars in 2012-2015. The new transaction on 48 such fighters will be shortly concluded. Production capabilities of Komsomolsk-on-Amur Aircraft Production Association allow to execute all agreements, tells a source in aviation industry: «It is the guaranteed loading of capacities for some years».

In May of this year the Chinese mass media (in particular, Want China Times) noted that purchase of Su-35, in fact, is inevitable, as existing capacities on production of own J-11 planes did not allow to reduce a gap on equipment from the Air Force of other countries. They also paid attention that the Russian fighters possess the increased internal stock of fuel that will allow Beijing to supervise disputable territories freely. The such conflicts at China with Philippines and Japan (on arms of the last the American fighters F-15 consist). According to the source, close to negotiations, the Chinese party called water area control "strategic objective".

This transaction noticeably will increase a portfolio of weapon orders of Russia, tell sources. China in 2013 got the Russian weapon and military equipment for the sum more than 1,8 billion dollars (having taken then the fourth place) and since then of a holder of leading buyers did not drop out.

It is not excluded that the Russian-Chinese contract can serve as first "counter" in a domino effect, having pushed other countries (as India, for example) to acquisition of the latest Russian arms.