Su-30МКИ beat Typhoons on a zero

Posted by admin in Aircrafts on December 2, 2015 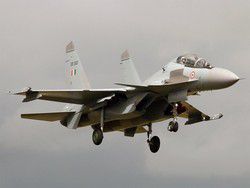 They carry the name Indradhanush ("Indradkhanush"). The British pilots participated in maneuvers on the fighters Typhoon production ("Typhoon") the Eurofighter companies ("Evrofayter"). The parties fulfilled tactics of air fight, including two Typhoon against one Su-30MKI and on the contrary. According to the Indian military, they won a victory with the score 12:0, that is appeared stronger in all tactical scenarios of doctrines. The total amount of orders of the Air Force of India on the Russian fighters Su-30MKI makes now 272 planes. Now these cars are made in India according to the license transferred to aircraft manufacturing corporation Hindustan Aeronautics Limited («By Hindustan аэронотикс»). From the 2007th 50 fighters after that according to the license in the country about 140 more cars were assembled were delivered to India in finished form from Russia. By 2018 the Indian Air Force expects to create 14 eskadriliya of the fighters Su-30MKI, that is by this time on arms 272 planes will consist all.