The Rosaviation allowed to continue Boeing-737 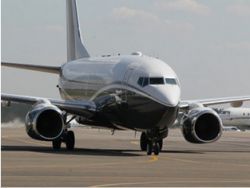 The Rosaviation did not find the bases for a suspension of flights of passenger Boeing-737 planes. It was declared by head of department Alexander Neradko following the results of meeting with air carriers, reports "Interfax".

According to him, the Russian airlines will continue to maintain aircrafts as registered in Russia, and abroad – on the Bermudas and in Ireland.

Neradko explained that the Interstate aviation committee (POPPY) sent the document in which asks to consider earlier sent letter on a suspension of the certificate of the Boeing-737 type void. «The meeting was unanimously that now the bases for the termination of operation of Boeing-737 are not available», – marked out Neradko. In it Sergey Kravchenko, representatives of the aircraft companies maintaining in Russia Boeing-737, and profile vemomstvo – Ministry of Transport and the Federal Service for Transport Supervision took part the president of the Boeing company in Russia and the CIS. The representatives invited to meeting POPPY, according to him, did not arrive.

Neradko added that, most likely, in POPPY «there are different points of view on this question to what various editions of statements which appear in mass media» testify.

On November 5 POPPY sent the letter to Rosaviation, in which was reported about a suspension of action of the certificate of type (one of the documents, allowing to maintain an airliner) on updating of Classic and Next Generation of planes of Boeing-737 family. Need of completion of a control system of elevators on what POPPY informed Boeing was called as the reason of such decision. After that in Rosaviation decided to hold meetings for situation clearing.

Boeing-737 – the uzkofyuzelyazhny turbojet passenger plane most widespread in the world. Is issued since 1967. In total more than eight thousand units are made. Following the results of 2014 17,5 percent of transportations of passengers were the share of this liner the Russian airlines. Now the Russian airlines maintain not less than 150 such planes the most part from which is registered on Bermuda and in Ireland.