In Turkmenistan air passengers in large quantities remove from flights 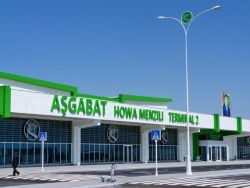 At the airport of Ashkhabad detain passengers and without explanation remove from the international flights. About it on November 5 reported a resource «Chronicle of Turkmenistan».

So, on October 24 more than 40 Turkmen citizens underwent this procedure, planning to take off for Istanbul (Turkey) – 27 people removed from flight of Turkmen airlines, 18 more people did not start up in the plane of Turkish airline.

All unaccomplished passengers had correctly issued tickets. The visa for visit of Turkey is not necessary to Turkmen citizens. The part of passengers could not pass passport control in the Ashkhabad airport, having heard from frontier guards «It is impossible!».

The reason of a ban on departure manages to be found out only to units, and thanks to them it becomes known about motives. If earlier from Turkmenistan did not let out young men who yet did not serve in army of Turkmenistan, now as it became clear, restrictions are entered and for those who already passed involuntary service. As Turkmen security officers consider, in Turkey there is a recruitment of young men in ranks of the terrorist organizations operating in the Middle East.