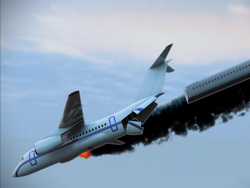 The Kiev engineer Vladimir Tatarenko developed and patented a way of rescue of passengers from a cabin of the falling plane by means of emission of a special capsule. About it tells the TJ edition.

On Tatarenko’s idea, the capsule with passengers fastens to a fuselage self-demountable elements. In case of failure the capsule separates from the plane and softly lands at the expense of parachute systems.

The similar idea was offered in 1923 by the Russian inventor Gleb Kotelnikov. However in the majority of similar decisions the capsule with passengers destroys a fuselage and does further use of the plane impossible. Tatarenko’s system allows to avoid this problem.

Tatarenko took out the patent for system in 2012. According to him, cost of introduction of its system in the passenger plane – about one million dollars. The engineer considers that airlines still did not introduce similar capsules because of unwillingness to spend spare cash.

«I offered idea to airlines. Answer:" Make, certificate, show". I have no such money», – he told.

Tatarinov published on video YouTube with demonstration of work of system in 2013. Unfortunately, virus it became only after crash of the Russian Airbus-321 plane of Kogalymavia airline. The roller became extremely popular in Facebook and gained more than 240 thousand reposts.