Knights of the bearing screw 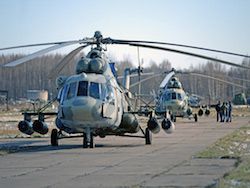 On what fighting "crocodiles" of the Russian Air Force are capable

On October 28 in Russia Day of army aircraft is celebrated. On the eve of a holiday to "Lenta.Ra" went to the 344th Center of combat training and a pereuchivaniye of flight structure in Torzhok where we learned about innovations of the Russian system of training of military helicopter pilots for what the crew from two people is necessary to the fighting rotary-wing vehicle and why in air fight of helicopters the loop is useless.

Duet of "Alligator" and "Hunter"

The army aircraft in Armed forces of Russia consists only of helicopters. Today its value noticeably grew. The main functions of army aircraft – ensuring mobility of land forces, their supply and fire support from air. In the spring of this year during a peacekeeping operation and tranquillity on the Crimean peninsula in an acute crisis in Ukraine divisions of army aircraft successfully carried out landing and transport and prospecting tasks. Fortunately, business did not reach fire suppression.

Participation of pilots of army aircraft in similar operations is impossible without preliminary preparation. the 344th Center of combat training and a pereuchivaniye (TsBPP) of flight structure in Torzhok is unique – others such in Russia simply are not present. It works in two main directions: professional development flight both an administrative board of army aircraft and a pereuchivaniye of pilots on new types of helicopters.

In the first case pilots have training theoretical preparation, and in practice apply the acquired knowledge, having already come back to the bodies. However if it is a question of a pereuchivaniye of pilots on new type of the helicopter, the whole complex of a theoretical and practical training is applied. In recent years the material base of the center essentially amplified, training of helicopter pilots passes with application of different computer technologies, interactive training programs. As the chief of the cycle "Tactics" of courses of retraining major Victor Sokolov told to "Lente.R", at one time even the question of transfer of listeners of the center on computer theoretical preparation without participation of the teacher was considered, however later this idea refused.

The retraining program considerably changed, Victor Sokolov noted. Fighting possibilities of the Russian Alligator Ka-52 helicopters and Mi-28 «The night hunter» extended thanks to equipment of these cars by modern electronics. If earlier tactical preparation of crews was under construction on application of optiko-mechanical and analog aim and navigation complexes, now train in work with the digital automated systems of conducting fight.

For example, the updated equipment of "Alligator" allows to observe and lock on the land target on removal of ten kilometers, and range of its defeat by rockets increased to seven that exceeds average radius of defeat by means of antiaircraft defense of the opponent. The new equipment made possible round-the-clock use of fighting helicopters and on a step approached them to all-weather use. Besides, in shock divisions of army aircraft the so-called automated control system for an operational and tactical link when the crew of the shock helicopter receives purpose coordinates for destruction takes root and distinguishes it already on the way. According to experts, this system in times reduced time for correction of actions of fighting vehicles and increased their efficiency. 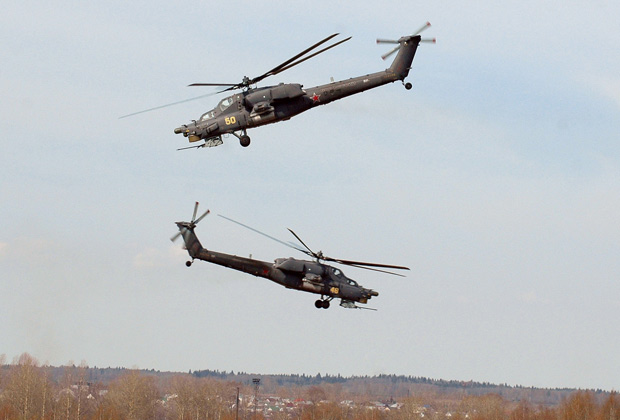 Also the course of tactics of air fight evolved also. Besides standard actions at fire contact to the opponent in air listeners study how to strike pilotless aircraft. Victor Sokolov emphasized that new Russian helicopters at due qualification of the pilot are capable to destroy both low-dimensional and low-flying bespilotnik, and the thrones patrolling at height over five thousand meters. "Alligator" and «The night hunter» rise by height of five and a half kilometers, and the rest – business of air-air rockets.

It is remarkable that retraining of pilots in torzhoksky TsBPP not always includes practical flight preparation. Almost all helicopter regiments of army aircraft equipped with new equipment, have own pilots-instructors, graduates of the center. After end of a theoretical course the pilot carries out flights on new types of rotary-wing cars at itself in a part. Thus, flight preparation of pilots of "Alligators" on "Chernigovk’s" air base to Primorsky Krai and «Night hunters» from the Korenovsky aviaregiment in Krasnodar Krai is conducted.

And after all quite recently the situation looked differently. So, within the rearmament program on the Island base in the Pskov area the party Ka-52 and Mi-28, however the pilots was put, capable to pilot the 52nd, there it did not appear. According to stories of teachers of the center while the Pskov pilots comprehended flight skill on "Alligators" in Torzhok, TsBPP borrowed Ostrovskys cars for Victory parade in Moscow. Now there were instructors who train colleagues on piloting of new equipment as major Sokolov was expressed, «make multiple copies pilots budding». At present the center is engaged in preparation of instructors for regiments in the Novosibirsk region.

The number of new helicopters constantly grows in armies: only under existing contracts, the army aircraft should receive more than 250 helicopters Mi-28 and Ka-52. If before Ka-52 were considered as the perspective car of fire support of special troops, now it is obvious that these helicopters become a basis of army aircraft along with Mi-28. Besides, in a series there is a Mi-35 helicopter – development of the fulfilled Mi-24 platform, which task – to facilitate transition to cars of new generation. 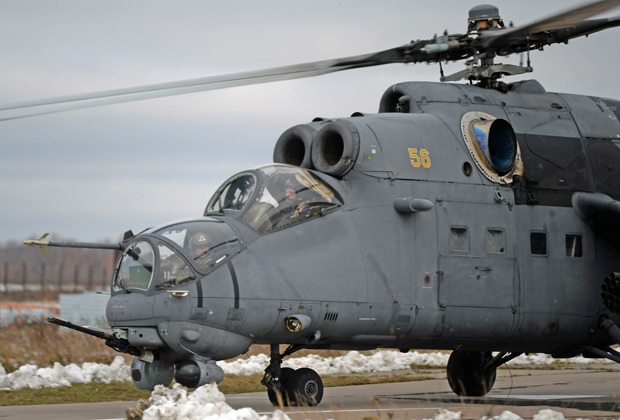 Rates of production of new shock helicopters – about 50 cars in a year, also it is possible to expect that rearmament of military units of army aircraft will come to the end within the next 4-5 years.

Besides theoretical and, necessarily, flight preparation the great attention in TsBPP is given to a pereuchivaniye of officers on new types of helicopters by means of electronic exercise machines. In the center the computerized complex simulating a cabin of the Mi-8 helicopter is equipped. As his operator captain Vladimir Kostyuk, a basic purpose of the exercise machine – working off by crew of the helicopter of certain algorithms of actions in various situations, first of all what are too dangerous to training by the real car explained "Lente.Ra".

Everything begins with avionics studying, or as it is accepted to speak at the Russian pilots, BREO – the onboard radio-electronic equipment. The pilot masters sequence of turning on of devices before take-off and at start of engines. Then – working off of various situations in a mode of imitation of flight. On the circular panoramic screen of the exercise machine the image of the surrounding district is reproduced, and the operator from a post of management enters various parameters. The pilot on the exercise machine appears in the conditions of zero visibility, deduces the virtual helicopter from snow and rain charges, fulfills landing at failure of engines.

All parameters of flight and management, even howl turbines at an overload and стрекот blades on bends, same, as well as in reality, behind the unique exception – the cabin of the exercise machine is motionless. To equip the exercise machine with hydraulic system of imitation of a list technically probably, but as one of officers of TsBPP told to "Lente.R", it almost twice increases its cost. Upon termination of a course on the exercise machine listeners pass on it practical examination following the results of which the commission of instructors of TsBPP makes the decision on the admission to flights. 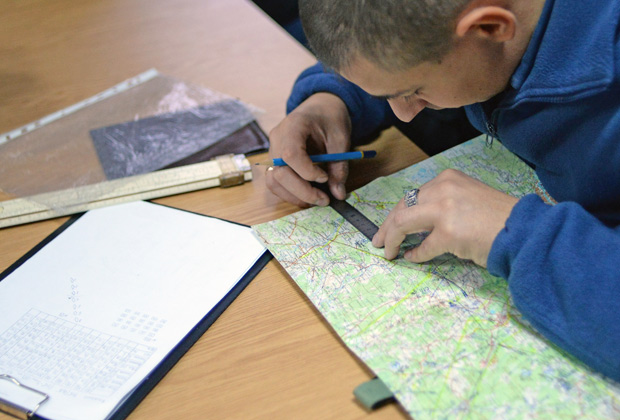 Laying of a flight route of the Photo: Pavel Bednyakov / «Tape. Ру» 1/7

Use of electronic exercise machines will extend, note in TsBPP. Till the end of this year to Torzhok training complexes of the shock Mi-35 helicopter and military transport Mi-171 will arrive. At the beginning of the 2015th center expects exercise machines for Ka-52 and Mi-28, both are ready, experts of TsBPP carried out on them test and balancing and commissioning. Their delivery from manufacturer to Torzhok – only a matter of time. Also in the near future in the center will construct a new educational and training complex which will include on two Alligator exercise machines and «The night hunter» for working off of actions as a part of a link. Open there is a question what will be these exercise machines – static or on a rejected hydroplatform.

The science to win

Except a pereuchivaniye and professional development of pilots of army aircraft of TsBPP actively is engaged in scientific work. All information on this direction is coded, however something managed to be learned from torzhoksky pilots. So, the chief of the center colonel Andrey Popov mentioned that since 2010 of 344 TsBPP actively participate in development of the model commission of the Russian fighting helicopter of new generation which can fly with a speed to 500 kilometers per hour. Without opening details, colonel Popov explained that now pilots-researchers of the center are involved in design of configuration of a cabin of the new rotary-wing car, and also study various options of arms of «the future helicopter».

Specialists of the torzhoksky center shared results of the previous scientific researches a little. It appears, pilots-researchers put an end in long-term dispute of aircraft designers and military on possibility of piloting of the fighting helicopter and use of arms on the land purposes one person. Well-known «the flying tank» Ka-50 «, the big brother of "Alligator", it «A black shark», in due time the made furor on the international air shows and become the hero of the feature film with the same name, did not go to a series. Tests showed that at available and perspective onboard equipment the pilot cannot «become torn on two parts». Despite all efforts and arguments, practice dictates the requirements – at high-speed flight at heights from 25 to 100 meters search, the certain crew member should be engaged in capture and destruction of the purpose. In the future automatic equipment will replace it, but then, years through 30, all shock component of army aircraft of Russia, according to the chief of 344 TsBPP Andrey Popov, will already pass to pilotless aircraft. 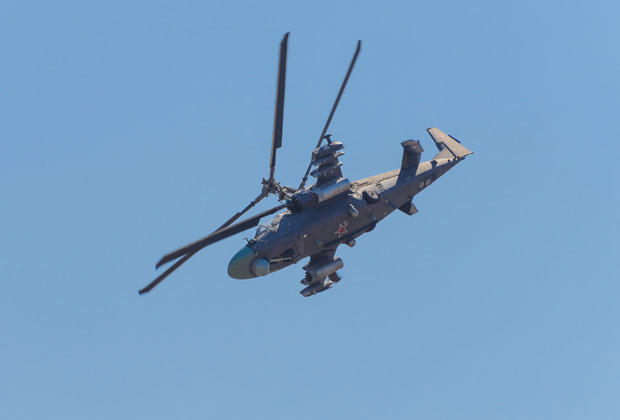 One more myth discredited by pilots of Torzhok, is connected with phenomenal ability of the Mi-28 helicopter to carry out "loop". Certainly, this maneuver shows high flight and prochnostny characteristics «Night hunter», however for air fight it is inapplicable. Falling of speed and loss of visual contact to the opponent turn the air car into an easy mark for enemy means of defeat.

Today the 344th Center of combat training and a pereuchivaniye of flight structure of army aircraft endures lifting. In recent years on air base in Torzhok some new Mi-28, modernized "crocodiles" of Mi-35, Ka-52, and also military transport Mi-8 in MTB5 and AMTSh updatings arrived. Soon the center expects delivery of the high-grade educational version «Night hunter» Mi-28UB (educational and fighting) with the coupled management. The general raid of hours of pilots in TsBPP grew also: according to the chief of the center of colonel Popov, in 2009 it did not exceed 6000 hours, and by October of this year reached 9000. The principle «when the helicopter appears over a battlefield, the victory itself falls in infantry hands» the urgency did not lose.