Under a plane wing nobody споёт 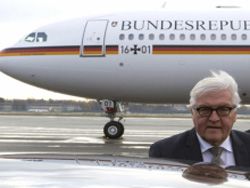 Technical problems disturb with own fleet to normal work of the federal government.

Past Monday, November 9, between Rome and Berlin slightly was there was no diplomatic scandal. The matter is that long ago the planned visit of the head of foreign policy department of Germany to Italy because of the German party appeared under the threat of failure. Assistant Secretaries of foreign affairs of Germany Frank-Walter Steinmeier Shtaynmayer (Frank-Walter Steinmeier) within several hours feverishly called up to the Italian party and asked to wait for them the chief. Reason: near at hand there was no serviceable airliner! At first the German delegation was brought by the governmental A-319 plane: serious problems were found in it with the engine.

Some hours later the faulty car replacement nevertheless was found: the minister changed "Konrad Adenauer’s" Airbus A-340 which since March, 2011 is the main plane of governmental fleet and is used usually federal by chancellor Angela Merkel (Angela Merkel). However and this plane забарахлил. During departure on a vzlyotny strip failure in computer system was found in it! The minister again had to come back and look for other possibility to take off for Italy. Eventually visit of the politician rescued German private business. One of airlines could put at disposal nevertheless of Shtaynmayer’s team the small turbo-propeller Beechcraft King Air plane therefore the part of German delegation stayed at home. German midovets do not open cost of rent of this charter flight.

It seems that our ministers are not lucky with planes. So, past week the head of the Ministry of Foreign Affairs could take off not at once for the planned business trip as its administrative Global 5000 plane made by the Bombardier Aerospace company, unexpectedly failed. Some days before it visit of the minister of affairs of development of Gerd Muller (Gerd Muller) in Morocco in general should be cancelled: replacements to the zabarakhlivshy liner were not!

On October 5 because of "Conrad Adenauer’s" breakage Angela Merkel and delegation accompanying it were compelled to fly India in rather Spartan conditions: on the Air Force military transport plane of Germany of Airbus A310. Meanwhile, on new «a personal airliner» Merkel made the first flight not too long ago: in June, 2011. Though new this plane actually already then was not: it was constructed in 1999 and managed to fly 50 thousand kilometers. "Konrad Adenauer" was completely converted and equipped top-level: onboard even there was a small hall for press conferences. This plane as well as all liners of fleet of the government, it is equipped with antimissile systems of the American concern Northrop Grumman, capable to provide protection against class rockets «the earth – air».

Earlier outdate planes of governmental fleet created more than once problems for German politicians. The loudest case occurred in 2008 when after plane breakage the president of Germany of that time Horst Kohler (Horst Kohler) was compelled to return home after official visit to China usual passenger flight