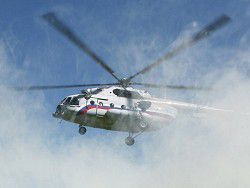 On a place of crash of the helicopter in Murmansk region bodies of 16 victims are found.

Cотрудники of Investigatory committee on transport, prosecutor’s offices, labor protection and "Federal Service for Transport Supervision" carry out searches at company operator office «SPARK of an avia» in St. Petersburg in the case of Mi-8 helicopter crash in Murmansk region.

The purpose of check is search of documents on the broken helicopter. To find out, to whom it belongs documentary, still it was not possible. On the one hand is Mi-8 of JSC SPARK avia airline, but at the same time there are data that the helicopter can belong and JSC Apatit. As duplicates of the passport of the car (the original is in the helicopter) are not found, reports LifeNews.

«The dredging of technical documentation connected with falling of Mi-8 is carried out. The staff of the company who possess any information are interrogated and can help to an investigation», – the representative of Northwest investigatory management on transport Andrey Solnyshkin declared.

While all searches and seizure of documents go only in the direction of broken Mi-8 if any shortcomings are found, complex check of all «SPARK of an avia» is quite probable.

In addition, in the company labor protection which carefully checks all documents on pilots works: whether the safety measures were observed, whether there corresponded level of crew of complexity of this flight, whether there were processings at crew members.

On the night of June 1 the Mi-8 helicopter broke in the Tersky region of Murmansk region at East Munozero’s settlement. The car sank. According to available information, onboard there were 5 crew members and 13 passengers. As a result of incident of 16 people were lost, 2 were traumatized.

It is known that among victims – the general director of JSC Apatit Alexey Grigoriev, the head of administration of the city of Kirovsk Andrey Zvonar, the commander of crew Alexey Tovpenko, Valentin Babkin, which position is specified, the vice governor of Murmansk region Sergey Skomorokhov and the deputy minister of natural resources and region ecology Alexander Alkhimchikov.

Upon a crash of helicopter criminal case on signs of the crime provided by h is brought. 3 Art. 263 of the criminal code of Russian Federation («Violation of the rules of traffic safety of the air transport, entailed on imprudence death of two or more persons»).

As the official representative of SKR Vladimir Markin declared, among the main versions of incident the consequence considers refusal of aviation equipment and that circumstance that the pilot got to difficult weather conditions, lost spatial orientation and faced a water surface.