The Syrian planes in two days made 151 departures

Posted by admin in Aircrafts on January 1, 2016 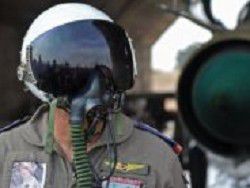 «In two last days the Air Force of Syria made 151 fighting departures and struck blows to 323 purposes… Including seven command points of terrorists to the east of the city of Homs are destroyed. Two warehouses of ammunition, congestions of the cars armed with machine guns to the north of the city of the Boor, and also some groups of terrorists in a neighborhood of the cities of Homs and Aleppo are destroyed also. More than 20 broneukreplenny cars are also liquidated, in particular, in the province Idlib and South to the west of the city of Aleppo», – told Maykhub.

Besides, army divisions prevented attempts of bandits to break to the city of Deraa.

«In the southern region the Syrian army established control over a zone to the north of the settlement Sheykh Miskin, having prevented attempts of terrorists to break through army positions to the city of Deraa. A large number of fighters, their arms and equipment is killed. Near Deraa two command points of extremists, shop on production of explosive devices were liquidated. Near Damascus armies expanded a control zone to the south of the international highway», – he told.

According to the general, «in central the region the concentrated fire blows were put on congestions of terrorists and their command points, and also oil-and-gas fields Shair and Dzhizel, and also on camps of preparation of terrorists at the city of Mkhin in the province Homs».

«In the northern region the Syrian army together with groups of a national militia continues approach South to the west of the city of Aleppo, control over 15 settlements» is established, – Maykhub told.

«On the province Latakia northeast armed forces occupied some strategic heights, destroyed a significant amount of terrorists, in the majority of the non Syrian origin», – he added.