Posted by admin in Aircrafts on January 8, 2016 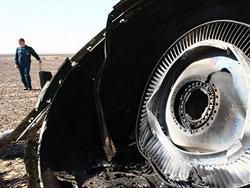 To mass media the first data from recorders of the Russian A321 plane which has wrecked in the Egyptian sky of the Kogalymavia company became known. As reported on Monday "Interfax" referring to information from a source in the Egyptian Committee on the aviation incidents, the broken vessel did not submit SOS signal before disappearance from a radar and was not exposed to external influence. If messages are true, the main version of accident there is a technical malfunction.

The plane following on October 31 from Sharm el-Sheikh in Sankt Petersburg, was wrecked after 22 minutes of flight. On its board there were 217 passengers and seven crew members. Experts from Egypt and Russia conduct investigation of circumstances of the happened. The found bodies of victims are already delivered to St. Petersburg, the identification is begun. Insurance payments will be paid to families of victims of failure. Nevertheless, questions as in general there could be a failure, remain.

The Airbus plane is considered reliable car, it on an order surpasses the international norms in many indicators of safety. All experts unanimously say that the age of the concrete plane – – in itself could not become 18 years a cause of the tragedy. It is known that the plane passed all necessary surveys and repairs. Pilots were skilled, and to "Kogalymavia" recently at Ministry of Transport of claims on operation of vessels was not. However the tragedy happened, so, something was not so.

On Monday «The Moscow Komsomol member» published interview to the former vice-chairman of Interstate aviation committee (POPPY) Alexander Knivel. «Our country does not fulfill the requirement of the Appendix of 19 IKAO (International Civil Aviation Organization – "joint venture") "Management of safety of flights" which was installed on December 14, 2013. It demands to establish target level of safety of flights in the state, to accept the state program of safety of flights, having demanded its introduction and performance by all airlines, developers and producers of aviation equipment, the servicing organizations, airfields, air traffic control structures, educational institutions. In our country of anything it still it is not made», – the expert shared the reasons.

If its conclusions are true, it turns out that in Russia there is a serious problem with the general management of civil aviation. All airlines work on uniform standards of service and operation of cars. But, probably, a problem with these standards?

With this question of "joint venture" addressed to experts.

"Joint venture": – In what advantage of uniform body?

– Process of flights specially prepared people should order. Let’s tell, the minister of transport can not know aircraft, at it there are a lot of other duties. The head of "Rosaviation" – the person prepared, the engineer on operation of planes. There is at us still an Interstate committee on aircraft (POPPY). If all departments to unite, the situation would be better, the discipline would raise.

"Joint venture": – Than the present system of safety of flights is bad?

– I will tell so: at seven nurses to the child is always worse. Than more organizations are engaged in safety of flights, subjects a situation it is more difficult. It is necessary to concentrate system of selection of experts in one hands.

All our airlines will be certificated on one standards. But often the people far from aircraft become heads of firms. Gendirektora sometimes do not understand a question, and it is a serious shortcoming. In due time I created chair on aviation safety, in eight years prepared 1850 experts, and for all I am sure.

Heads of airline should be checked, whether they correspond to this position. Otherwise the one who has a lot of money, buys the company and starts to work.

"Joint venture": – It is said that Russia does not fulfill all requirements of IKAO, therefore and with safety of flights of a problem at us.

– Such fact can take place. The matter is that requirements of IKAO have recommendatory character, but we have national rules. Though we execute more than 90 % of rules IKAO. There are also own features, but in it there is nothing terrible, our norms influence safety positively.

I represented three years in IKAO USSR and as much – Russia. A problem not in norms of IKAO, and in selection of shots. It is necessary to prepare them, instead of to put on acquaintance.

– Now we have many departments which are responsible for aircraft, and as a whole it as if without supervision, – the former deputy minister of civil aviation considers also the USSR which was the deputy director of Federal service of air transport Victor Gorlov. – In the Soviet Union there was a Ministry of civil aviation. It was created, when transportations in the country reached 46 million passengers a year. The government considered necessary to transform Head department of merchant air fleet to the ministry. It was responsible for all aspects of activity of civil aviation.

In 1991 we passed to market conditions. And from this point in civil aviation the whole series of unreasoned reforms and reorganization began. All this was on my eyes. With 1986 on 1991st I was the deputy minister, and then 11 more years worked in new conditions on responsible positions so I can compare.

In my opinion, the serious loss is put by a present trekhzvenny control system. There is a Ministry of transport which defines policy as a whole. There is a Federal agency which carries out only the state services. Also there is still a supervision service.

Instructions of IKAO say that for the purpose of safety of flights uniform department of civil aviation which would be responsible for all questions should be created. When there was a ministry, in official duties of the deputy minister on flight service by the first point was written down that it bears responsibility for safety. I was a deputy on a science, on repair and operation of aviation equipment, at me it was written down by the third point. But if you take duty regulations of the minister of transport and its deputy on aircraft, the head of the Federal Service for Transport Supervision and his deputies, responsibility for safety of flights is not registered anywhere. It is nonsense or the greatest cunning? All expert community literally boils because of this problem.

If to create the ministry now it is difficult, nobody prevents to create separate federal executive authority which directly would submit to the government. At Ministry of Transport hands never will reach safety in civil aviation. There are such productions – aircraft, astronautics, nuclear power where the professional management is required by definition.

"Joint venture": – Whether norms of IKAO in our country are observed?

– The appendix 19 says that levels of safety of flights in the state should be defined. But someone should define them. Earlier about levels of safety had no conversation. Was considered that accidents should not be in principle, but they were. Now all began to see clearly, understood life realities. Decided to define levels. And all question in the one who will calculate them, and will be responsible for safety? He should tell: «Use civil aviation, on our norms on one million transported there will be so many victims, and it is considered safe flight». The appendix of 19 IKAO demands, that for it the high statesman answered.

Also the Appendix 19 says that there should be a state program of safety of flights. In Russia of such program while is not present.

"Joint venture": – What is instead of it?

– About ten years ago the document which called the safety program was created. But many experts considered that it not that is necessary. Besides then yet there was no Situation 19. By the present moment expired all terms of that program. Other program is not present, and it should be.

"Joint venture": – As far as an acute problem of selection of shots in the management of airlines?

– Our legislation allows to appoint heads of airlines of the people who have not been connected with aircraft. They can be general directors and members of boards of directors. The reasonable head should pick up a professional staff.

Let selection of shots is not carried out centrally. But the head should know aviation documents and be responsible for safety of flights.

In civil aviation there is a sector which demands management, it state enterprise. But there is a commercial sector, there the state should carry out regulation. Unfortunately, Ministry of Transport conducts policy in a separation from the main production, from "Rosaviation". Happens that such rules which are unacceptable are imposed to "Rosaviation". And in aircraft such things are very dangerous.