The Ministry of Emergency Situations will receive six Il-76 planes

Posted by admin in Aircrafts on January 9, 2016 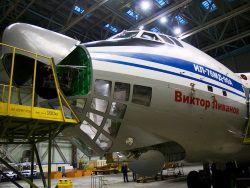 – They will deliver cargoes of humanitarian assistance, to make sanitary evacuations and to carry out a wide range of tasks for the Ministry of Emergency Situations of Russia in an every spot on the globe, – the minister after agreement signing told.

Receipt of new planes in the order of the Ministries of Emergency Situations air rescue centers will allow to increase mobility of saving divisions in long-term prospect, will simplify suppression of natural fires, will create possibility for continuous work at transfer of aircrafts of the ministry to planned long-term repair.

Il-76TD-90A is a civil updating of transport worker Il-76MD-90A which mass production is already started in Ulyanovsk (by request of the Ministry of Defence aircraft factory will assemble 39 cars). Letters in the name TD mean "transport distant". On "TD" the military-oriented equipment is dismantled. The former version of the plane, Il-76ТД, serially being issued in Uzbekistan, at the Tashkent aviation association of a name of Tchkalov, had the maximum take-off weight in 190 tons and loading capacity – 50 tons.

The upgraded plane received other possibilities. It has a new design of a wing: developers applied lengthy panels that allowed to reduce mass of the aircraft, to reduce labor input of its production and to increase take-off weight to 230 tons, and useful loading – to 60 tons. Il-76TD-90A has the new chassis and fuel system, the Perm PS-90A engines, it is a lot of radio-electronic equipment which completely meets the requirements of IKAO.

The civil version which will be under construction for the Ministry of Emergency Situations, is not certificated yet. But, as earlier chief designer of aviacomplex of a name of Ilyushin Nikolay Talikov declared, works on it are already conducted.

Also ulyanovets will be engaged in repair and service of the Il-76 planes which are already available in fleet of the ministry. Besides, Vladimir Puchkov showed interest to Tu-204 family planes.

– For performance of tasks we need the long-haul plane, capable to make nonstop flight from Moscow to Anadyr, Petropavlovsk-Kamchatsky. We puzzled representatives of the Ulyanovsk aircraft factory, they should prepare for us offers, – the minister explained.