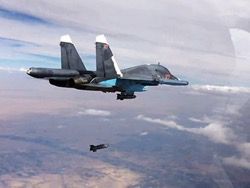 The Russian aircraft destroyed in the Syrian province Deyr-ez-Zor a column of petrocarts with the crude oil, going towards Iraq where the raw materials were processed and subsequently was realized in the black market. The official representative of the Ministry of Defence Igor Konashenkov reported about it, reports "Interfax".

«During conducting air reconnaissance near the city of Meyadin (province Deyr-ez-Zor) was found a column of the fuel trucks going towards the Syrian-Iraq border. The blow on a column was put with the Su-34 bomber which was on duty in air. Data of objective control confirmed column destruction», – he told.

According to Konashenkov, the column took out to Iraq for processing the oil extracted in under control «Islamic state» the regions of Syria. Subsequently oil products kontrabandno were delivered to the territory of neighboring countries and were realized in the black market, and proceeds went on financing of activity of the international terrorist organization.

Russia performs air operation in Syria since September 30, supporting to the country government in fight against terrorist groups, including with forbidden in the Russian Federation «The Islamic state» and «Dzhebkhat an-Nusra». The structure of aviagroup includes over 50 planes and helicopters, including Su-24M, Su-30CM, Su-25 and Su-34. With a request for rendering of the military help for counteraction to fighters to Moscow the president of Syria Bashar Assad addressed.